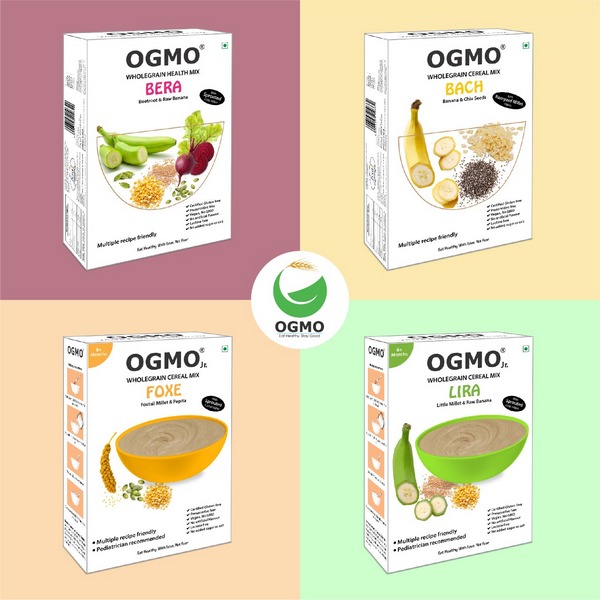 OGMO is expanding its portfolio to baby meals and introducing OGMO Jr. using some of our indigenous grains.

We are taking this as an opportunity to introducing an early love of healthy and whole foods to children.

OGMO Jr. assist you in maximizing your baby’s health and develop their taste buds while making weaning an easy experience for you.

Yes, we are bringing convenience to you without compromising on your baby’s health.

Say NO to spending more hours making food for your baby and say YES to spending hours playing with them.

LIRA or Little Millet and Raw Banana is a perfect combination
of wholegrain, lentil and healthy raw banana powder.

FOXE or Foxtail Millet and Pumpkin seeds combines
the goodness of Bengal gram in it.

BACH or Banana and Chia pair with nutritious Barnyard Millet flakes to make it a complete meal.

BERA or Beet and Raw Banana with Bengal gram, minor millet, pumpkin seeds and cardamom ticks all the right boxes
in healthy eating.

Benefits of Minor Millet in children

Millet based mid-day meals can boost a child’s growth by 50 per cent in three months, according to a study of 1,500 children in Karnataka which was released by Niti Ayog. (link to the article in the end)

ICRISAT scientists who have been part of the research say that improvement in the children was noted in terms of weight and also length. An increase in height was noted in a few subjects as the nutritional intake by the body improved.

In a first ever scientific study of its kind in schools, millet based midday meals were found to significantly boost child growth in terms of body mass index (BMI), nutrition and also can be a better rice substitute in India. Findings of the study published in the journal Nutrients were released on Wednesday by NITI Aayog member Ramesh Chand, and CEO of the National Rainfed Area Authority, Ashok Dalwai.

Consult your paediatrician before starting to feed Minor millet based food to your babies.

Start millet based meals for your babies  after they are 6 months old.

Some excerpts from ICRISAT research on millet food for children.

Findings from a recently published three-month feeding study with 1,500 children in Karnataka suggest that millet-based mid-day meals can increase relative growth by 50%. Children rated the meals, which were designed by scientists and chefs and included little millet as a rice substitute, over 4.5 on 5 for taste. The findings of the study were released jointly by Prof Ramesh Chand, Member, NITI Aayog, and Dr Ashok Dalwai, Chair, Empowered Body, Doubling Farmers’ Income, Government of India, in New Delhi on Wednesday.

ICRISAT holds the world’s largest collections of millet genetic material and works closely with Indian Institute of Millets Research and other partners to improve millets by developing varieties having higher nutrient levels as well as the more conventional traits like yield and resilience,” commented Dr Peter Carberry, Director General, ICRISAT.